Austin sits on the Camino Real de los Tejas, one of the earliest branches of the Camino Real (McGraw et.al, 1991), a prehistoric trade route – later utilized and named by the Spanish – connecting Mexico in the south with the Tejas Indians of east Texas and Louisiana. From San Antonio to Austin, El Camino Real de los Tejas is a trail that hugs the Balcones Escarpment from spring to spring: San Pedro, Comal, San Marcos, Manchaca.

Coming into Austin from the south along what is now Old San Antonio Road, the Camino Real "continued up present South Congress Avenue in Austin to Pleasant Hill School" (McGraw et.al, 1991, p. 187). At the point the trail turned east heading to east Texas and Louisiana, the home of the Tejas Indians.

But if one were not headed to east Texas (the Spanish were focused on east Texas to thwart French settlement there) but rather wanted to go north, e.g. to reach valued Georgetown flint and further north the Indian villages at Waco, a logical extension of the  El Camino Real de los Tejas would be to continue following the Balcones Escarpment northward, just as it had done from San Antonio, through New Braunfels, San Marcos, Buda and into Austin.

That trail is what Frank Brown coined the "Trail Going North". Once in Austin, rather than veering east to Nacogdoches, that trail continued north hugging the Balcones Escarpment and its' springs: Barton, Cold, Eddy, Seiders, Spicewood, and further north Salado and Waco Springs.

Frank Brown, an early settler in Austin, records in his Annals of Travis Country and Austin (F.Brown, chapter 3, p. 3):
The early history of Austin is replete with stories of Waco Indians, this trail being the logical route they would have taken to reach Austin. If indeed "Hueco Springs", four miles north of New Braunfels is named after the Waco Indians (distinct from those in Waco, Texas) that frequented there, this trail would have been the logical route to and from Waco, Texas. Comanches likewise would have used this trail to raid or trade with tribes to the north, or enroute to destinations like Torreys' trading post, site of the Tehuacana Creek councils between Comanches and the Republic of Texas.


And while Brown does not mention them explicitly, The Council Oaks, a grove of oak trees that served as a meeting place for Comanche and Tonkawa tribes, must surely have been on this trail. The Council Oaks were on the north bank of the Colorado, near the Shoal Creek crossing.

The only remaining oak of this grove is Austin’s famous Treaty Oak. Mrs. Walter H. Caldwell, Treaty Oaks's owner prior to purchase by the City of Austin, said  "The road, which is now the street in front of the Caldwell home, was in the olden days the only open road to the river and up through the hills. It was then know as Pecan Road, and it passed within a short distance of the famous tree"(The Hondo Anvil Herald, Hondo, TX, May 25, 1928)

The historical marker at the foot of Treaty Oak reads: 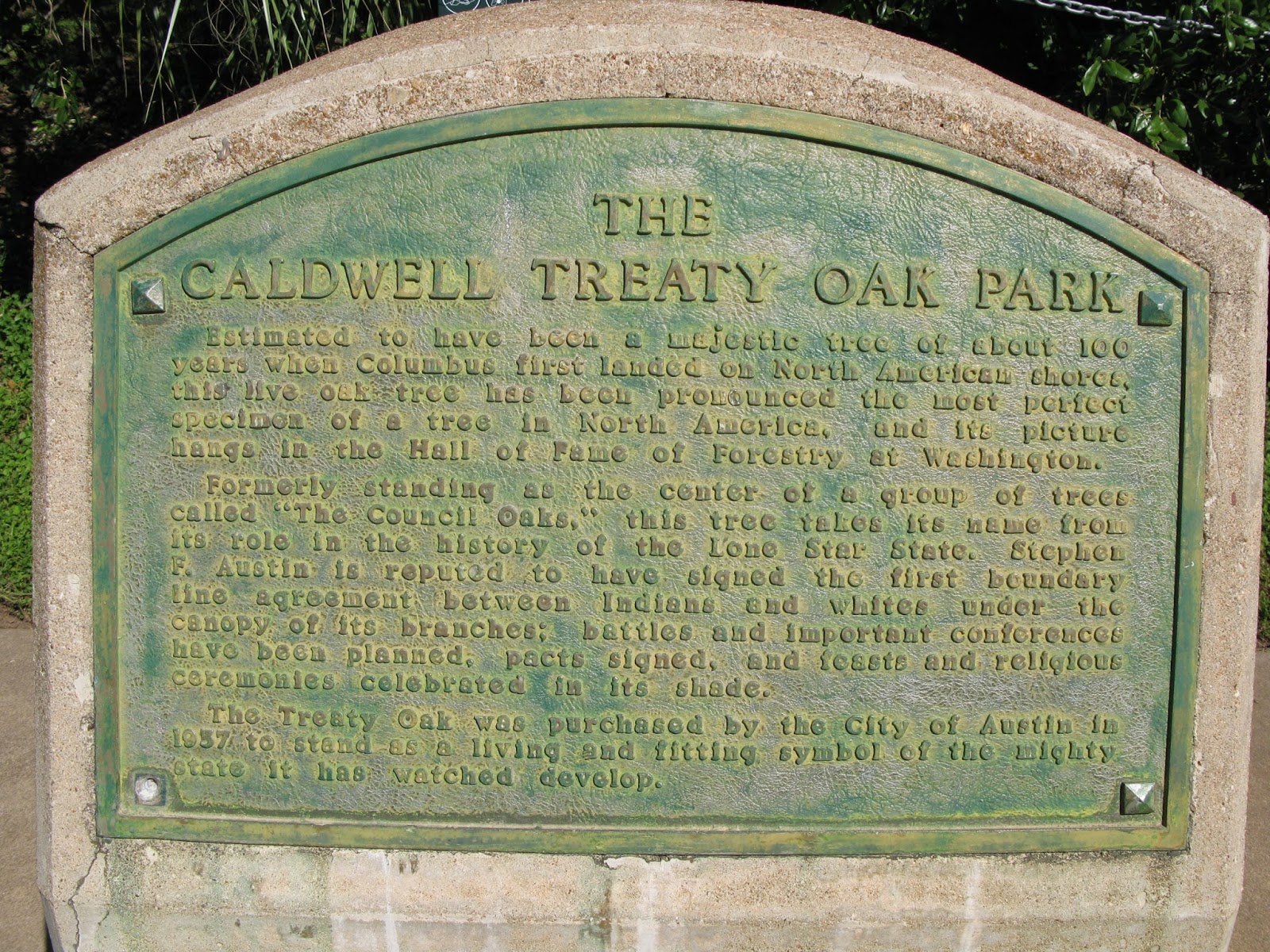 North American shores, this live oak tree has been pronounced the most perfect specimen of a tree in North America, and its picture hangs in the Hall of Fame of Forestry at Washington.

Formerly standing as the center of a group of trees called "The Council Oaks," this tree takes its name from its role in the history of the Lone Star State. Stephen F. Austin is reputed to have signed the first boundary line agreement between Indians and whites under the canopy of its branches; battles and important conferences have been planned, pacts signed, and feasts and religious ceremonies celebrated in its shade.

The Treaty Oak was purchased by the City of Austin in 1937 to stand as a living and fitting symbol of the mighty state it has watched develop.

The map below shows the general route through Austin using Brown's landmarks. Notice that the route between Pleasant Hill Elementary School and the Shoal Creek crossing of the Colorado, is essentially South Congress.

The path of the trail "passing out above and near the residence of the late Gov. Pease" may have tracked closely with today's Windsor Road. The map snippet below (Revised Map of Austin, Texas, 1885) shows Windsor as a trail passing by the Pease Mansion.

Posted by Richard Denney at 5:23 PM

Email ThisBlogThis!Share to TwitterShare to FacebookShare to Pinterest
Labels: Fords on the Colorado, Indian Trails, Spicewood Springs and the Austin Oaks PUD